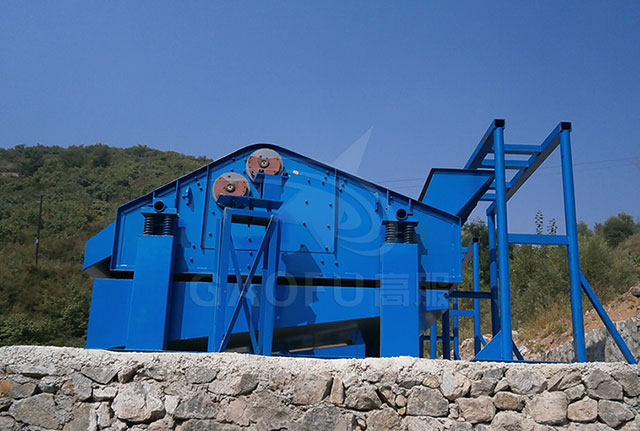 Gaofu dewatering screen is used for the classification and dehydration of potash feldspar. Classification part can be configured with the appropriate aperture sieve plate according to the requirements of the beneficiation factory. The sieve plate is made of polyurethane lined with steel. It is very solid, wearable and long service life, and will not pollute the material. The particles on the screen return to the ball mill, and the particles under the screen are removed from the iron. Dewater screen is used for dewatering process of potassium feldspar, refers to the last step of potash feldspar after iron treatment. The potash feldspar, which is removed from the iron, is dehydrated by a dewater screen. After screening, the potash feldspar powder contains about 20% of the water can be dried or packed. Under the screen underflow sedimentation in the sedimentation tank, and then into the dewatering screen for dehydration, after this step, the material on the screen surface water is behind 20%, which can be meet the requirements of dry stacking and transport, and the material under screen can be discharged into the sedimentation tank for settlement.

Please feel free to give your inquiry in the form below. We will reply you in 24 hours.
E-mail: [email protected]